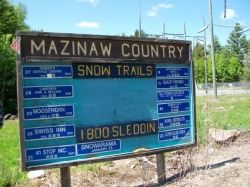 This site is dedicated to the people who have been in the band, and to those who supported the band during our time together.

"Is a Mazinaw band from bancouver!" But don't believe the signs. Even though we did a few "country" tunes from time to time, Mazinaw was considered an amorphous rock band. You Google it, I'm busy. My name is Stevo by the way, and I'm the guy in the band photo above who is the only one standing. Lazy assholes those other guys were! And when I say "Amorphous" that's just me being all mysterious and shit. Musicians like to do that from time to time. I use to loathe writing the band bio for a press release, not that I would ever dream of letting anyone else do it. It always was over the top and aimed to be sincere and heartfelt at the same time. It would go something like this:
"Mazinaw is impossible to categorize, a wonder to behold live, and effortlessly display a complete mastery of lyrical and melodic sensibilities."  Blah, blah.
That sort of thing. By the end of our "official" 5 year run our press release was as follows:

You could say we stopped taking ourselves seriously and embraced the silliness of what was then the 1990's Vancouver indie rock scene. That said, I always was quite serious about the music, and for a long time all things Mazinaw consumed my life. In my mind it was always more a musical documentation of life than any attempt at being a sustaining, successful outfit that would one day be in the top ten and be playing festivals year after year. If it happened, great, but we were more interested in having a damn good time along the way. And that we did, I'm happy to report. Lyrically, the songs were all coded stories about the people in my life and situations that arose. It would be too weird to just sing about it straight though, so I sort of wrote in a way that only I would be in on the real meaning of the song, and tried to have it be open or ambiguous enough that maybe a stranger might, just might think it is about something else.

In this website you'll find some treasures, trinkets (almost the band name but it was taken) and various previously buried treasures. To our fans that did believe, we are both grateful and would like to now acknowlege their good taste and fortitude. On the road we consistently were told we were the best band that had been through the bar - and it "was too bad that no one was there because it was packed the night before." Typical.

If I said it once, I said it a thousand times: "put Mazinaw band at the top of the billboard, and the sushi special below."